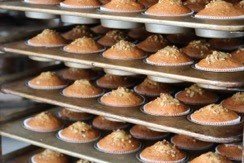 “We always strive for perfection in terms of efficiency, food safety and quality. We want to hit the highest industry standards and make sure we protect our customers and end-consumers with a safety program they are confident in. Metal detection adds another layer of ‘failsafe’ protection,” explains Jason Yada, National Director of Sales at Doughnut Peddler.

In the space of three years, Doughnut Peddler has gone from being a single-bakery operation servicing a single state, to a multi-site enterprise supplying retailers across nine North American states.

“We’ve seen a snowball effect in the last three years. Once our customers see what we are capable of, they want to work with us in other territories. We’ve been firing on all cylinders to meet this growth,” says Jason.

To keep pace with demand, 2017 saw the opening of two new bakeries – in Chattanooga, Tennessee, and Charlotte, North Carolina, and Doughnut Peddler has two more openings planned for this year, in Orlando, Florida and Houston, Texas. The company is now making more than 800,000 deliveries each year, transporting over 60 million doughnuts, cinnamon rolls, apple fritters and other freshly baked goods, to convenience stores across North America.

The company had always wanted to invest in metal detection, but needed a business justification for the investment. This rapid expansion provided the opportunity and the commercial case that Doughnut Peddler needed.

“We looked at various options and suppliers, gathered quotes and asked colleagues in the industry to share their experiences. We received positive feedback from everyone who had owned a Fortress unit – no-one had anything negative to say about them,” recalls Doughnut Peddler’s Jon Dairman, Senior Operation Manager – Procurement.

Doughnut Peddler’s brief, in terms of what it wanted from its metal detectors, was straightforward. “Just to detect metal. We didn’t want any bells and whistles, just something reliable – I wanted it not to be an issue, to be able to set it and forget it,” says Jon.

From a metal detection perspective, though, the project wasn’t entirely straightforward. Doughnuts come out of the fryer and onto a 12ft cooling conveyor made from high temperature belting. Doughnut Peddler wanted to mount the detectors at this point, as it provides the last opportunity to check the doughnuts before they are packed into plastic trays that sit in metal baskets. However, the combination of high temperatures and moisture creates a ‘product effect’ that can confuse metal detection equipment, as it cannot discriminate between this and actual metal contamination. This can result in frequent false rejects being triggered.

With Doughnut Peddler’s lines running continuously at speeds of 160 doughnuts per minute, the company could not entertain the possibility of false rejects disrupting production.

Fortunately, Fortress’ Stealth metal detector was able to achieve reliable performance on this product, thanks to a combination of powerful digital signal processing technology – a technical platform which drives the detector, providing high-speed precision detection, and dual frequency operation – which facilitates automatic compensation for extreme product characteristics. Fortress contains all processing power on one board, versus multiple boards required on some competitive models, and one of the technical features of this is Fortress’ FM Software, which was created to enhance the detector’s performance and stability, especially in difficult applications.

These technical and mechanical features ensure that signals, due to mechanical, electrical, airborne and product, are nullified or eliminated.  This allows the detector to effectively identify signals created by the three types of metals Ferrous, Non-Ferrous and 300 Series Stainless Steel, overcoming the risk of false rejects.

Four full conveyor Stealth systems are installed on lines in the company’s North Carolina, Tennessee and Florida bakeries. As Doughnut Peddler continues to pursue an ambitious inter-state growth strategy, the ability to demonstrate this level of rigor is proving beneficial, according to Jason: “We are already seeing that having enhanced product protection in place has the potential to unlock different customers. Some of the potential customers we are reaching out to are even more encouraged in working with us as they learn of our use of the robust metal detection HACCP plan we have in place.”

Just three years ago, Doughnut Peddler was servicing the single state of Arizona. At that time, the company was delivering all over the state with approximately 6,000 miles driven nightly. Today, Doughnut Peddler drives well over 25,000 miles every night (the equivalent to circling the circumference of planet earth), delivering doughnuts to valued customers.

Doughnuts delivered by Doughnut Peddler in 2016, lined up end to end would stretch, in a straight line, from Los Angeles, California, to New York, equating to over 2,450 miles of doughnuts. Twelve months later, in 2017, the distance reached doubled to a coast to coast round trip equating to over 5,000 miles. This means that thousands of miles of doughnuts will be scanned through Fortress metal detectors on an annual basis in Doughnut Peddler facilities.